Historically, young people were the disruptors, the trend setters. But today’s young people are more like conformists trying to beat the system. Marketers need to rethink their obsession with youth.

Historically, advertisers targeted young people because they were the people who changed how we view brands and the culture around them. The young have traditionally been the disruptors in society, from the rock & rollers in the fifties, hippies & revolutionaries in the sixties and punks in the seventies to slackers in the 1990s. This was expressed in misbehaviour brought on by ‘Sex and Drugs and Rock ‘n’ Roll’. The young today think and behave differently from previous cohorts of the same age. Younger generations are becoming more conformist. These shifts can be seen in almost every developed country from US to South Korea and are accelerating.

Many things considered by marketers to be youth disruption are not truly disruptive and probably were never that youthful.”

Teenagers start drinking alcohol later and are getting drunk less often. Since 1998, the age when young Australians first try alcohol has risen from 14.4 to 16.1. Since 2002, the proportion of 15-yearolds getting drunk more than once has more than halved (see table 8). In the UK, 20% of 16-24s are teetotal. Teenage drug use of any sort is also falling, including alcohol, tobacco, cannabis, inhalants and sedatives, dropping from 89% to 69% in Sweden and 77% to 39% in Iceland (see table 9). Much of this is a function of more intense parenting. A study of 11 western nations published in the Journal of Marriage and Family found that since the sixties, the time mums spent on childcare has increased from 54 minutes a day to 104, while time spent by fathers has nearly quadrupled to 59 minutes per day (see table 11). This doesn’t include the time these ‘helicopter’ parents spend tracking their offspring.
Surveillance by mobile, whether by technology in their phone or from their 24-7 presence on social media, means that there is little room for rebellion. As a result, the young of today are conformists trying to beat the system rather than disruptors trying to break it. From K-pop to YouTube Stars, today the youth play inside the box. Many things considered by marketers to be youth disruption are not truly disruptive and probably were never that youthful. Take UK ‘youth’ music festival Glastonbury. When it started, the median age of attendees was 34. Now it’s 40. Brands, like music festivals, just need to feel young at heart rather than be exclusively young.

In the business world, it is widely believed the most successful entrepreneurs are young, like Mark Zuckerberg with startups like Facebook. The Harvard Business Review tells a different story. Its analysis shows the founders of the fastest-growing start-ups were on average aged 45. In the music world, according to Music Business Worldwide, today’s biggest pop stars are aged 38. While the average blockbuster movie star, according to blogger Stephen Fellows, is 45, up five years over the past decade.

So the marketing industry needs to get over its obsession with youth. The historic truths and the conventional wisdom that supports th 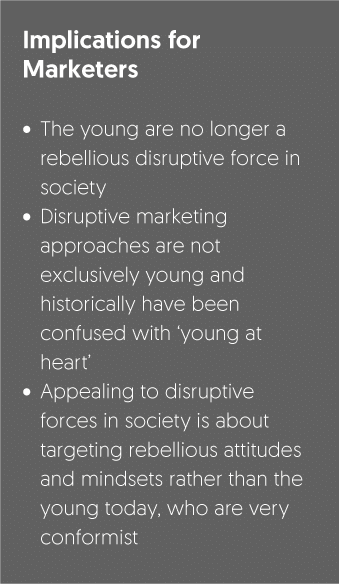 em are no longer relevant in today’s world of digital transformation. Young people are easier to reach thanks to an abundance of youth media. Thanks to lifestage changes, their appetite for new brands may be bigger but the older consumer may have longer lifetime value, so we should focus on winning at the point of change not generation. The young have diminishing discretionary income so we need to focus on older age groups. Finally, the young are not the source of disruption, we all are!

Disposable Income: The Rules Have Changed